How to Make Silk From Silk Worm?

Silk extraction technology can be traced back thousands of years ago, an invention originated from ancient China thousands of years ago. Even today with such advanced technology, the extraction of silk still uses this ancient technique . It is well known that silk is extracted from silkworm cocoons, but how are silkworm cocoons formed? How is the silk extracted from the cocoon? How does the extracted silk become beautiful silk fabrics ? Explaining these problems needs to start from the life cycle of silkworm.

The Lifecycle of a Silkworm

A silkworm has to go through 4 stages in its life, namely eggs, larvae, pupae and adult moth. The total time is about 56 days. But this only represents the silkworm. Wild requires five stages, namely silkworm eggs, ant silkworms, mature silkworms, silkworm cocoons and silkworm moths. The total time is about 50 days. The different stages correspond to each other. Generally, the eggs begin to eat two to three days after they mature, and the main time is during the larval stage.

The life cycle of silkworms begins with the eggs. A female moth can lay about 500 eggs. Within a few days after laying eggs, the silkworm will die since its sole purpose of life is to reproduce.

Silkworm eggs look like fine-grained sesame seeds, about 1 mm wide and 0.5 mm thick. A female moth can lay about 450 to 500 silkworm eggs, weighing about 1 gram. Silkworm eggs are light yellow or yellow when they are first laid, and change to red bean color after 1 to 2 days, and then change to grayish green or purple after 3 to 4 days, and they no longer change, which is called fixed color. The outer layer of the silkworm egg is a hard egg shell with yolk and serous membrane inside. The embryo in the fertilized egg continuously takes in nutrients during the development process and gradually develops into an ant silkworm. It crawls out of the egg shell and becomes empty after the egg shell It becomes white or light yellow.

When a silkworm hatches from a silkworm egg, its body color is brown or russet.  The silkworm is about 2 mm long and 0.5 mm wide. After crawling out of the egg shell, it will eat mulberry leaves in 2 to 3 hours.

The silkworm babies that have just hatched from the eggs are black like ants. That is why call them "ant silkworms." They are covered with fine hairs, and the hairs will not be obvious after about two days. The ant silkworm has an appetite about 40 minutes after it emerges, and the feeding process is about to begin. Silkworms live on mulberry leaves. After eating mulberry leaves, their body slowly turns white. After a period of time, they begin to moult. There is about one day when molting, without eating or moving like sleep, this is called "sleep." After one molting, it becomes the second instar larva. It sheds its skin once, its life cycle enters next stage, it needs to molt four times before it becomes the fifth instar larva and begins to spin and cocoon.

When the silkworm reaches the end of the fifth stage, it will look for a cocoon camp. At this time, they’ll no longer eat, they’ll crawl around looking

for corners to spin in, it is necessary to put something that can be supported in the silkworm rearing box to help the silkworm cocoon, such as some dry branches and dry grass branches. The mature silkworm first spits out the silk, then sticks it to the boil, and then connects the surrounding supports to form a cocoon net; after the cocoon net is formed, the silkworm continues to spit out the messy silk circle to thicken the inner layer , The spinning method is curved, and the silk is made into a cocoon; the silkworm arranges the spit out into a neat silk circle.​

When silkworms spin silk, their heads keep swinging, and the muscles of the head stretch back and forth with the swing, pulling out the liquid silk in the body. These liquid silks will quickly condense into a solid when they come into contact with the air. The silkworm will spit out. The silk is arranged in neat "8"-shaped loops. Every time we knit more than 20 loops (called a silk row), move the body, and then continue to sew the silk row underneath. After weaving one end, weave the other end. So The shape of silkworm cocoons is always thick at both ends and thin in the middle. Each cocoon of a silkworm needs to change positions 250-500 times to weave more than 60,000 "8"-shaped silk loops.

In the process of cocooning, it is best not to move the silkworm rearing box, and do not touch the silkworm with your hands or other objects. At this time, the silkworm needs to stay in quiet environment, or it may die without cocoon.

The color of the cocoon can vary from white to yellow, depending on the type of silkworm and its diet. Wild silkworms use yellow silk to make cocoons because the silk blends better with the leaves around them. However, most of the cocoons on the silk farm are now white. This is because the silkworm has been domesticated for many centuries and selectively bred to make it appear whiter. White silk is easier to dye than yellow silk because you don't have to bleach it first. This is more convenient for the textile industry, which is why white silk is commonly used in the sericulture industry.

How the silk threads are made ?

Cocoon peeling is the process of stripping off the cocoon coat outside the silkworm cocoon. Cocoon clothes are loose and messy threads, thin and fragile, and cannot be reeled.

Cocoon selection is to remove the inferior cocoons that cannot be reeled or are not easy to reel.

The cocoon shape is very neat, the thickness of the cocoon layer is also uniform, the color and shrinkage of the cocoon are normal, the surface with no defects or only a few minor defects is the selected cocoon; there are defects on the surface, but the degree is more minor , A minor defect but still able to use is a secondary cocoon. 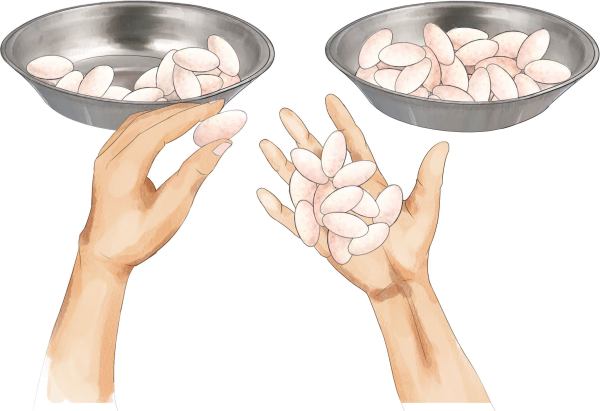 The process of appropriately swelling and dissolving the sericin around the cocoon silk by using the action of water and heat (sometimes adding chemical additives). Cocoon boiling makes the cocoon silk weaken the glue strength between each other, which is conducive to silk reeling, it is an important process in the silk making process. The quality of cocoon boiling directly affects the quality of silk. The benefit of boiling the cocoons is that it softens the silk. By boiling in water, the sericin is a gummy-like protein coated the other protein in silk that makes silk feels rough can be dissolved in water, also will make silk fabric can be easy to dye with smooth hand feeling.

After processing, raw silk is divided into warp threads and weft threads, and they are interwoven to form a silk fabric according to a certain organizational law, which is the weaving process. The production process of all kinds of silk fabrics is not the same, and can be roughly divided into two types: raw weaving and cooked weaving: raw weaving, that is, the warp and weft yarns are first made into fabrics without smelting and dyeing, which is called green silk, and then the green silk is dyed Into the finished product. This production method has low cost and short process, and is the main method used in silk production. Cooked weaving means that the warp and weft yarns are dyed before weaving, and the finished silk does not need to be dyed to be finished. This method is mostly used in the production of high-end silk fabrics, such as brocade and taffeta.

Silk weaving include silk satin, silk crepe de chine, silk habotai, silk chiffon, silk twill, silk georgette, silk brocade and etc. Each of these weaves has a unique method of layering and weaving silk, which gives the fabric a different texture and appearance. Silk satin is the most popular in silk fabric with its tight weave which has shiny and smooth surface, suitable for dresses and beddings.